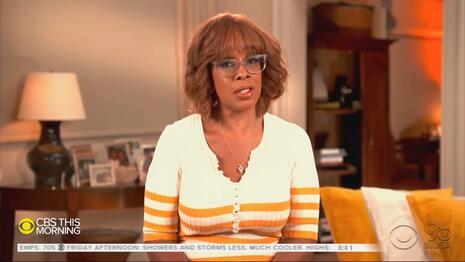 The death of civil rights leader and Congressman John Lewis (D-Georgia) has drawn outsized media attention — on the level of the death of a president. I'd bet the death of President Gerald Ford over the holidays in 2006 drew less media attention than Lewis has received. CBS surely didn't devote primetime specials called “Celebrating a Hero” to Republican presidents. But on Friday's CBS This Morning, co-host Gayle King announced they were all putting together an hour called “Celebrating a Hero” to John Lewis, organized by Gayle's pal Oprah Winfrey, black filmmaker Tyler Perry, and actor Brad Pitt:

Oprah and I shot our stand-ups yesterday here at the Santa Barbara bureau [Oprah's mansion], Tyler Perry shooting his at Tyler Perry Studios, I don't know where Brad Pitt is shooting his, but I can't wait to see how all this turns out.

There hasn't been a discouraging word about Lewis, for example, getting a 100-percent positive rating from NARAL/Pro-Choice America, so the unborn black babies didn't have civil rights.

Lewis was hailed by the media for insisting President Trump's election was illegitimate, part of a Russian plot.

King began the show by gushing “I know we all watched that [memorial] service from beginning to end. It was so good to see Barack Obama, who I thought summed it up really well when he said the life of John Lewis was exceptional.”

They also closed the show touting Obama's speech. Substitute co-host Vladimir Duthiers said ” I was going to say, put an exclamation point on what former president Obama said — John Lewis will be seen as a founding father.” Jericka Duncan, also filling in as a co-host, added “Amen.” King finished: “You are so right about that. Amen indeed.”

“John Lewis was an extraordinary man,” Winfrey said. “A man of great vision who lived a life with the purpose of making sure America lived out its ideals.”

“This is a celebration of the ‘boy from Troy,'” said Perry. “A forefather of the civil rights movement, who would live to see his contributions for equality result in witnessing the swearing in of the first Black United States president.”