Home General News ‘It caused a mass panic’: travelers in Europe rush to get back... 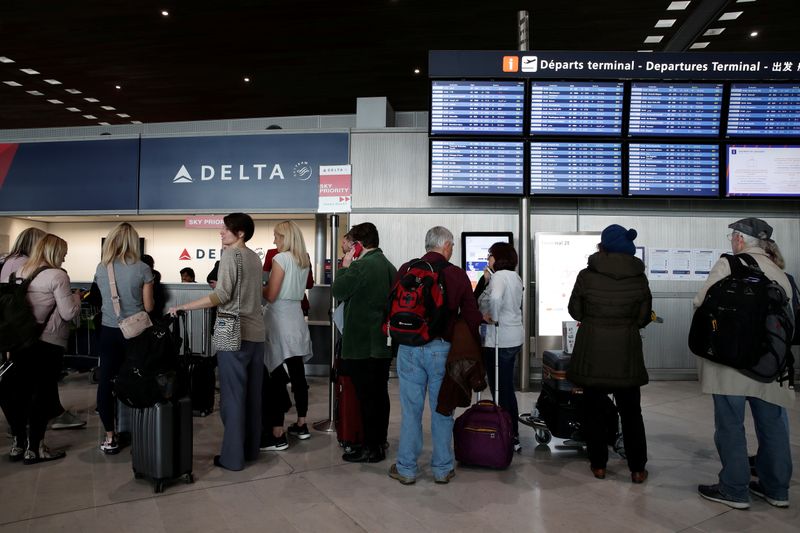 People line up at the Delta Air Lines ticketing desk inside Terminal 2E at Paris Charles de Gaulle airport in Roissy, after the U.S. banned travel from Europe, as France grapples with an outbreak of coronavirus disease (COVID-19), March 12, 2020. REUTERS/Benoit Tessier

MADRID (Reuters) – Bleary-eyed and stressed, U.S. and European travelers at Madrid’s Barajas airport scrambled to board the last flights back to the United States before a 30-day suspension intended to curb the spread of coronavirus begins at midnight on Friday.

“It caused a mass panic,” said 20-year-old Anna Grace, a U.S. student at Suffolk University who was on her first trip to Europe and swiftly changed her booking to fly back home instead of going on to France.

The four friends traveling with her were not so lucky and could not rebook.

“All our friends and family told us we had to come to the United States. We’ve been in the airport since 5am,” Grace said.

Nearby, Cristina Elvira, a pensioner traveling to Miami felt relieved to leave Spain, where new cases have increased exponentially over the past days to make it the most badly affected European country after Italy and France.

“We are lucky to be able to leave Europe,” Elvira said as she checked in for her flight.

Some, however, were worried about what to expect when they arrive in the United States.

“I have had to change my ticket and bring the trip forward because, if not, I would have found the border closed,” said Miguel Paracuellos, a Spaniard who works in the United States.

“It is a measure that Trump has taken because as he is inept and has not been able to take any action there, he is somewhat blaming the external enemy, in this case Europe.”

Trump said he had to act because the European Union had failed to take adequate measures to halt the spread of coronavirus.

His travel order will not apply to Britain or to Americans undergoing “appropriate screenings”.

There were some 20 flights out of Spain to the United States on Thursday, said a spokeswoman for Spain’s airport operator Aena.