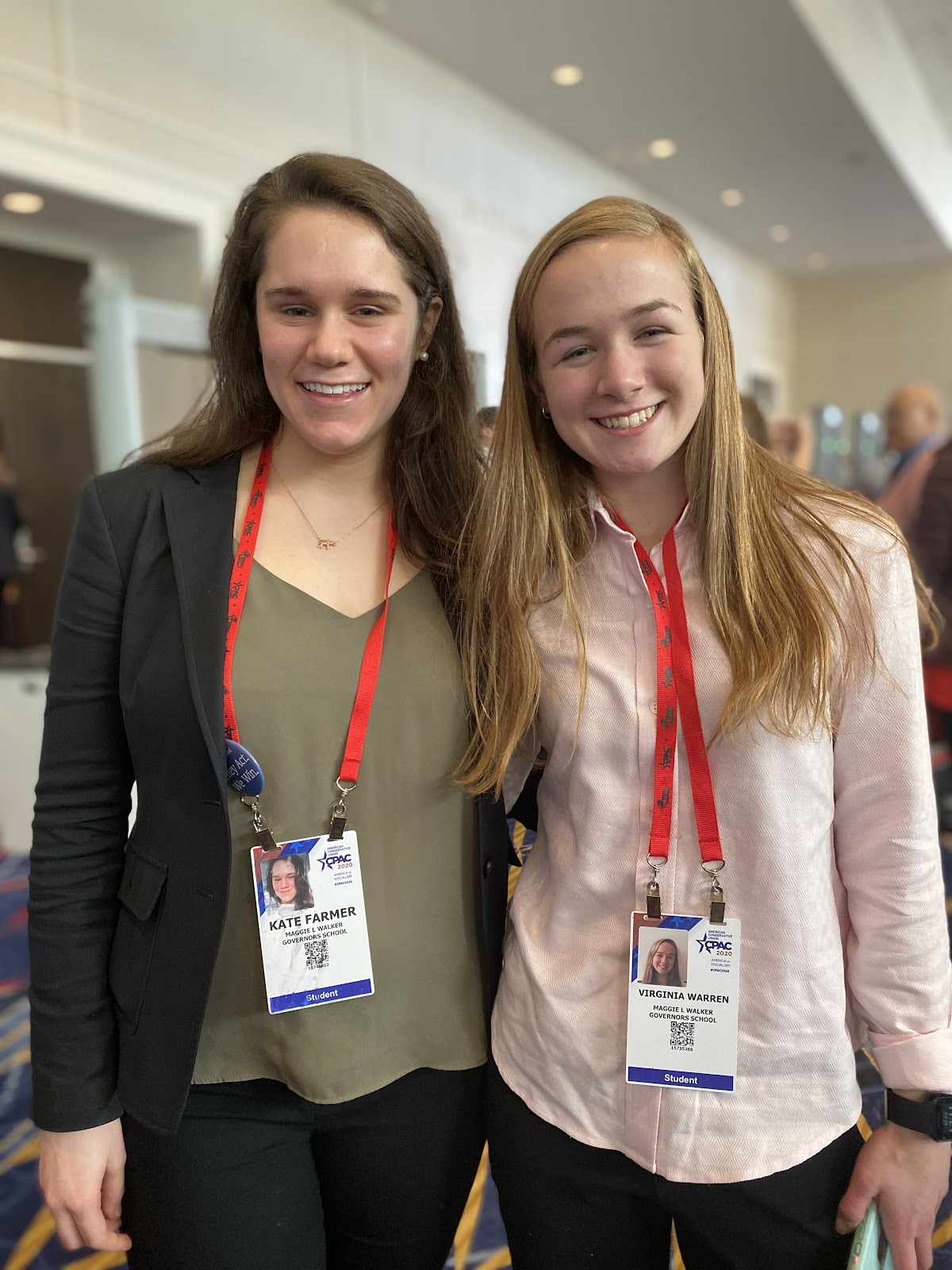 Why do young people flock to the annual Conservative Political Action Conference just outside the nation’s capital?

High school sophomore Virginia Warren had a personal connection to the 2020 Conservative Political Action Conference’s theme of “America vs. Socialism.” She was born in Canada, and her family experienced firsthand the consequences of socialized medicine.

“Seeing that type of government firsthand, and how ineffective their health care is, inspired me to pursue conservatism,” Warren said. “My grandma fell one night and had an actual wound in her head that was bleeding, but she didn’t get care until hours later. If you walk into a Social Security office, that’s what their health care is like.”

Since immigrating here when she was 3 and obtaining her American citizenship in 2016, Warren has been involved in the conservative movement. She’s part of her school’s Young Republicans club, currently headed by her friend, senior Kate Farmer.

“[CPAC] is our big rally day, where we get to be in the majority,” Farmer said. “It gets us energized and motivates us to spread conservatism in a school that doesn’t always like to hear it.”

This year marks Farmer’s fourth CPAC, which she attended with 30 of her classmates. The American Conservative Union organizes CPAC, the largest annual national gathering of conservative activists, held again again this year at the Gaylord National Resort and Convention Center.

“I think what keeps my conservatism so strong is actually being surrounded by the left,” Farmer said. “Going to school with the left all around me makes me want to be conservative more.”

For Grace Dwyer, who this year attended CPAC for the third time, fighting for her conservative principles is something she does on a daily basis at her all-girls private school in D. C.

Dwyer, now a senior, started a conservative group at school sophomore year with one of her friends. Their Constitution Club meets weekly to discuss issues in the Trump administration and other current events. The club now has 60 members.

Their club is energized, Dwyer said, when she and other members attend CPAC.

“It really brings up your hopes about the conservative movement,” Dwyer said.

Among her favorite speakers at the conference were conservative activist Candace Owens, Vice President Mike Pence, Fox Nation hosts Diamond and Silk, and Rep. Matt Gaetz, R-Fla. Those speakers addressed the younger generation of attendees specifically, which Dwyer said excited her and the rest of the club.

“Seeing Vice President Pence’s speech [Thursday] was amazing,” she said. “It’s strengthening to come here and see all these people from different communities come and support. Everyone chanting ‘USA’ and everything, it’s such a great experience.”

In the thick of those wearing “Socialism Sucks” and “USA” buttons and matching T-shirts was Parker Boggs, a Turning Point USA ambassador whose work with the organization began over the summer.

Boggs said he first became active in the conservative movement in July, when he attended Turning Point’s Teen Student Action Summit and learned more about efforts to counter illegal immigration. That’s now one of his most important issues, and he considers building a border wall between Mexico and the U.S. to be a necessity.

He also chooses to be a conservative because of his pro-life beliefs. Due to his Christian faith, Boggs said, he believes people should choose life in almost all cases.

“I’ve heard that narrative for so long, that a lot of women think they should be a part of the leftist movement because the Republicans want to control their bodies. But that’s really not true,” he said. “They’re protecting the body that’s inside them.”

Referencing the theme of CPAC 2020, “America vs. Socialism,” Boggs said that because few young people fully understand why a service or product can’t be “free,” they buy into the promises of those on the left such as Sen. Bernie Sanders, I-Vt., a self-proclaimed democratic socialist.

“The word ‘free’ got thrown around. You might be getting free education, free health care, but it’s literally going to go back into your taxes,” Boggs said. “Young people don’t understand that it will tank the economy.”

“This is MY convention,” said the 21-year-old James Madison University student. “Some people go to Comic-Con or other things, but this is it for me, so I’m really excited to be here.”

“When it comes to the left’s agenda, they really try to push it on young people. For me, I think for myself, I’m a free thinker, and I’m independent. I really enjoy researching things for myself,” she said.

Anderson’s advice to her generation is to ignore the narrative pushed by leftist politicians and the mainstream media. Instead, she said, young Americans should find out the real story behind important issues, such as socialism and abortion, through their own research.

“Socialism is not a good idea, and people need to wake up and stop listening to the politicians who glamorize it,” she said. “Research what socialism has done to countries, and you’ll find the real answers. Where the Democratic Party is going is not ideal, and it’s not American.”

T.J. Hawald says he has been coming to CPAC since he was 9 years old.

He has attended five times since then, missing only one year, when he was 10. And even though he accompanies his father, he said that he’s the one who wants to attend.

Hawald said his education is what inspired him to join the conservative movement.

“Everyone in my school is really far left. All my teachers poison my other friends, and I don’t really like that. Teachers should not be in charge. They choose what you’re learning,” he said.

CPAC is a star-studded event to Hawald. He carries around an autograph book with him in case he runs into any of his favorite speakers. This year stood out because he saw Rick Harrison, a star of the History Channel show “Pawn Stars,” and was able to get his signature.

Major: French and political science, training to be a teacher

For Victoria Spiotto, CPAC is a place where she can see the conservative movement in action.

“I love CPAC because you can be standing anywhere and see someone who’s doing something really grand in the conservative movement,” the UVA senior said.

When asked why so many in her generation are attracted to socialism, Spiotto said she thinks it’s because socialism relies on emotional appeals used in higher education.

“Universities teach a lot about power structures, disenfranchisement, and victimhood, which all together play off people’s emotions,” Spiotto said. “Socialist policies also play off emotion, not off the results of having dialogue and good discussion and academic integrity. People aren’t exposed to good ideas because they don’t want to hear things that contradict whatever it is they’re emotionally attached to.”

She said she prefers conservative public policies because they “promote ideas, not identity politics.”

“The left wants a monopoly on certain demographics because they use very simplistic terms, like gender and race, to categorize people into voting blocs so they can pander to them,” Spiotto said. “It’s actually quite pathetic.”

As a young person in the conservative movement, Colpitts said it’s important for students to talk about their ideas. The Democratic Party thrives on young people speaking out as activists, but those on the right don’t seem as vocal, he said.

“I know that I have friends who are right wing who just don’t really talk about it because they know they’re in the minority,” he said.

The place where he and his friends spend a significant amount of time, their high school, is left-leaning, Colpitts said.

Teachers whose ideas fall on the right side of the spectrum don’t voice their views either, he said. He only knows that they have different ideas, he said, based on their encouragement of his club.

Colpitts said only a few of the 11 active club members at school came to CPAC.

“It’s an interesting place to be,” he said of the annual conference. “It’s a learning experience.”